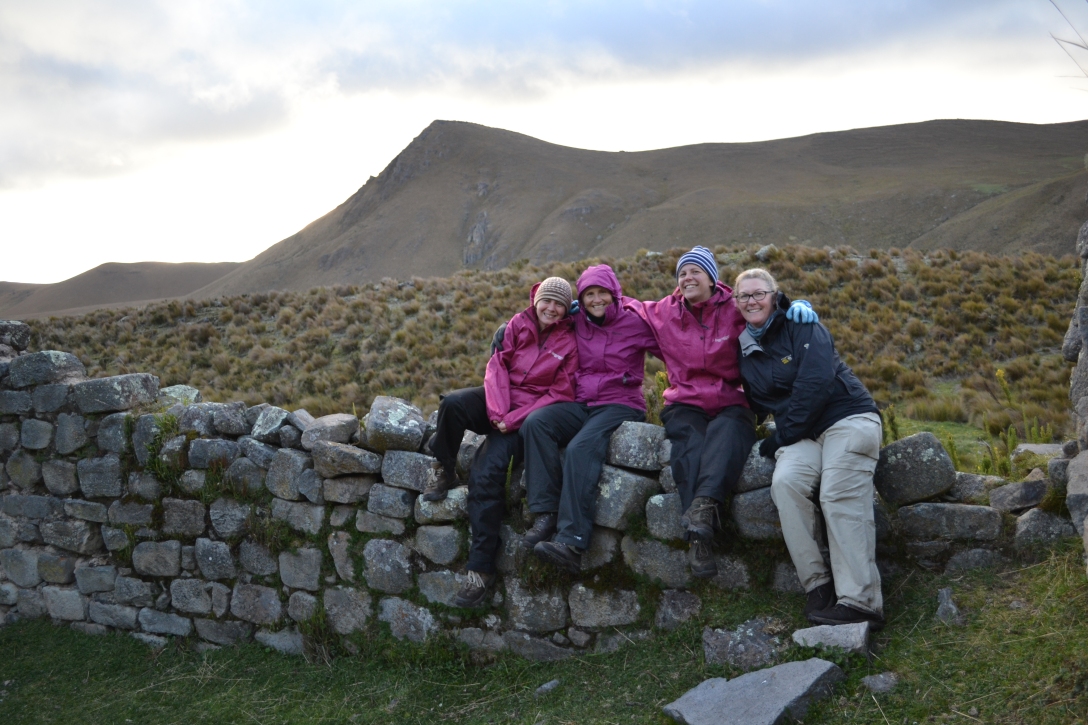 In July four of my regular hiking friends and I tackled the Ecuador section of the Inca Trail, along with one fellow hiker, the social media agent from the tour company, one guide, and one equine wrangler. The route takes three days to complete and requires a guide unless you’re already very familiar with the route.

The trail began in the town of Achupallas with an elevation of around 11,000 feet above sea level. Once we had our gear loaded up on to the pack horse and donkeys we set off through the town, out into the nearby farmland, and then up into Sangay National Park.

Local farmers often take their animals into the park to allow them to graze. Nearby communities also send herds of cattle into the park to free-range, only retrieving one when they need it for food or for a bullfight.

We hiked through the rocky remains of what was once the north-south route of the Incan highway surrounded by paramo grass and at times muskeg-like terrain. One poor donkey got stuck in the mud and while the wrangler was tending to him our pack horse ran away, along with all of our camping supplies.

Poor donkey had to be repacked by amateurs and his load kept slipping. Luckily the horse was eventually retrieved and we were able to sleep in tents instead of under the stars. As gorgeous as the milky way was (it was my first time seeing the milky way in all its glory!), the nights get downright frigid in the high Andes and I was happy to have a warm sleeping bag and tent.

Day two was a long hike of nearly nine hours. The first few hours were spent climbing and climbing up to the highest point of 15,700-feet. The wind was whipping, light rain was beating into us sideways, and we were surrounded by clouds. But it was all made worth it when the clouds lifted just long enough for us to get a stunning view of the Pacific Ocean far in the distance.

We then descended into a low plain which was once filled with water, but the lake has shrunk considerably and now cattle graze on the

flat. After trekking for several hours along the dried lakebed all while avoiding angry bulls, we arrived at a small site of Incan ruins where we made camp for the night.

The final morning saw light intermittent rain creating rainbows for us all along the trail. It was chilly with a bit of rain and much of the trail was boggy and wet. What usually takes four hours to complete, we did in two.

After a few quick celebratory photos we loaded into the waiting van and headed to nearby Ingapirca where we ate lunch and toured the ruins.

In my opinion, this is one of the best trips I’ve ever taken. The setting was phenomenal, the history amazing, and the sense of accomplishment sublime. I highly recommend this trek for avid hikers, but there are a few things you should know before you go.

Hire a guide. Much of the trail is clear, but some sections are not. Unless you’re confident in your navigational skills, you’ll want someone experienced to lead the way. I also felt it was well worth the money to have much of our gear carried by pack animals and all of the cooking and camp set up was taken care of by others.

We used Apullacta Tours out of Cuenca and were quite pleased. If you use them, ask for Luis to be your guide. He was born in Ingapirca, but spent years in New York City which makes him bilingual. He has a wealth of knowledge about the history, natural setting, and culture of the area and he is passionate about sharing it.

Know your limits. The altitude along this trail is much higher than most folks are accustomed to. Be sure you can handle the thin oxygen and steep climbs all while carrying a 15-20 lb. pack. We found that keeping hydrated and eating small snacks often helped immensely. You don’t need to be a professional mountaineer, but you do need to be in decent physical condition.

Be prepared. We might be near the equator, but the high Andes get cold! Your guiding outfit should send you a list of required gear, but don’t underestimate the cold temperatures. While it never dropped below freezing, we made good use of our winter hats, gloves, and wool socks. You’ll also want good rainproof wind protection for the high peaks. And of course, don’t forget your camera!

Have fun! That should go without saying, but on a hike like this, something is bound to go wrong. It may rain the entire three days. Your pack horse might run away (twice!). Or your tent may semi-collapse in the middle of the night (not that we would have any experience with that…).

The point is that you need to focus on the positive, remember why you’re there, and keep a good attitude regardless. No one wants to spend three days with a grumpy miserable hiking companion. BTW, the four of us made a deal before we left that no complaining was allowed on the trip. Not one of us broke the rule and we had a fantastic hike together.

Published by Wendy DeChambeau - Beyond the American Dream

View all posts by Wendy DeChambeau - Beyond the American Dream

3 thoughts on “Trekking through the Andes: The Inca Trail (Ecuador)”